To hear the full fascinating story about the plaques, where they came from, the people named on them, what they did and their connection with the school and what they did in the community and for Liverpool, you must make a point of watching one of our multi-media presentations, or read our leaflet (below) 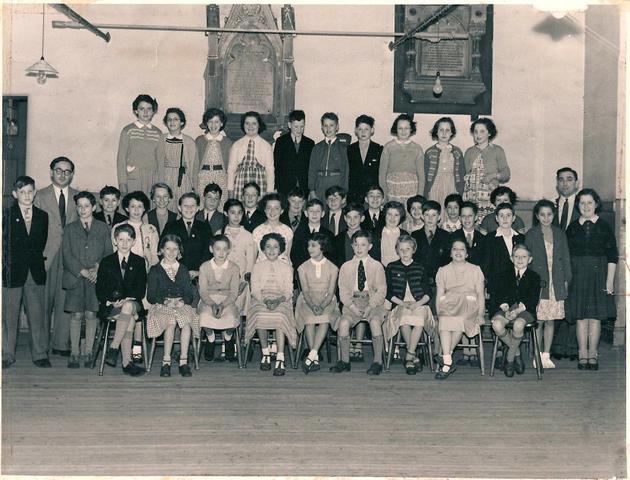 The plaques on the wall are part of the history of these schools - the King David Schools and the Liverpool Jewish Youth and Community Centre, Harold House. All these plaques were rescued from their original locations (for example the old Hebrew School as in the photograph), renovated, copied and installed here as a lasting testimony to the founders and benefactors of these organisations. These people were not only the founders of the organisations but they played a vital part in the history of the Liverpool Jewish Community.

The school will regularly stage an exciting multi-media presentation for pupils, teachers, parents and visitors, which will bring to life each of the people mentioned on the plaques and tell the fascinating story of their achievements and what they did for those organisations as well as what some of them did for the city of Liverpool and beyond.

Other than the brass plaque in the bottom right hand corner, all the others are replicas. The original Braham, Barned and Lewis plaques will be on permanent display in the Deane Road Jewish Cemetery in Kensington Liverpool The two original Harold House stones will be on display in the Museum of Liverpool: The Hoffnung stone is in the foyer of Princes Road Synagogue and the original Henry Cohen and Sam Samuels stones are embedded in a brick wall at the back of this building with the Henry Carr stone sited close by.

1.             Leslie Cohen was the great, great nephew of David Lewis who founded the departmental store in 1856. Leslie was the President of Harold House formerly a youth club and laid this foundation stone when it moved from the city centre to a new building in Dunbabin Road and became known as the Liverpool Jewish Youth and Community Centre.

2.             The Duke of Edinburgh visited the newly opened Harold House youth club and unveiled this stone which was in the vestibule.

3.             Abraham Hoffnung was an Honorary Officer of the Liverpool Old Hebrew Congregation at Princes Road Synagogue. The congregation subscribed to a fund for him but he handed it over for an annexe to be built onto the new Hebrew School in Hope Place where this plaque was on the wall.

4.             Leslie Cohen's father Harold Cohen paid for the first club house for the Jewish Lads Brigade in Upper Parliament Street where this plaque was up on the wall.

5.             When the JLB outgrew its first premises, Harold Cohen paid for a new building to be built in Chatham Street called Harold House, named after him. As well as it being the HQ of the JLB it soon became a youth club for boys and girls. Harold Cohen's wife unveiled the stone of which this is a brass replica.

6.             Sam Samuels was a keen worker in the Liverpool Jewish Community and Chairman of the Board of governors at the time when the Hebrew School closed down in Hope Place, became known as King David and moved to a new building in Beauclair Drive where this stone was located.

7.             Henry Carr was a successful businessman in Liverpool and worked tirelessly for the community. He was Chairman of the Board of Governors for this school and laid this foundation stone which was in the High School entrance.

8.             Henry Cohen was a brilliant medical student and later professor at the University of Liverpool and was knighted for his pioneering work. He became one of the Queens doctors and helped create the National Health Service for which he received a peerage and took the title Lord Cohen of Birkenhead. He was a governor of this school. This stone was located in the Primary School.

9.             Israel Barned was a wealthy Liverpool banker and tireless worker for the founding Jewish community. He was a benefactor of the Liverpool Hebrew School commemorated by this plaque which was on the wall. He also unveiled the foundation stone referred to in plaque No 12.

10.          James Braham was a gold merchant in Liverpool and one of the founders and benefactors of the Hebrew School in Hope Place where this plaque was on the wall. He founded the Braham Bequest which continues to be awarded in the school to this day.

11.          David Lewis founded the national chain of departmental stores from his first shop in Renshaw Street. He was a benefactor of Princes Road Synagogue as well as the Hebrew School in Hope Place where this plaque was on the wall.

12.          This actual brass plaque was affixed to the foundation stone of the Hebrew School in Hope Place which was opened by Israel Barned, see plaque 9.  This plaque names all those founders who served on its building committee. When Hope Place closed down and the new Primary School was built in Childwall, the plaque was put up on the wall outside the Head Teacher's office.

WHO ARE THE PEOPLE IN THE STONES?

The following are the briefest of notes taken from the fuller story that comprises the proposed series of presentations and brochures to accompany the montage.

DAVID LEWIS  1823 - 1885
Successful businessman and pioneering retailer. Founded Lewis's Department Store with premises all over the UK which at one time included Selfridges in London's Oxford Street. He was a founder of both the Liverpool Hebrew School and the Liverpool Old Hebrew Congregation. His nephews all of whom were directors of Lewis's included Louis Samuel Cohen one time Lord Mayor of Liverpool, Jack Brunel Cohen a founder of the British Legion Is buried in Deane Road Cemetery.

ABRAHAM HOFFNUNG 1832 - 1912
Successful businessman and commission agent in Liverpool in 1800s was at the forefront of the building of the Synagogue in Princes Road and a pioneer founder of the Hebrew School in Hope Place.

PROFESSOR SIR HENRY LORD COHEN OF BIRKENHEAD 1900 - 1977
Eminent professor at Liverpool University, one of the founders of the National Health Service and a physician to the Queen. Served as a chairman of the board of governors of King David School.

HENRY CARR  died 1958
Successful Liverpool businessman in local real estate. Benefactor to the community. Served as chairman of the board of governors of King David School. His son Cyril was a Lord Mayor of Liverpool.

SAM SAMUELS  died 1966
Benefactor and tireless worker in the Liverpool Jewish Community. Served as chairman of the board of governors of King David School and advisor to Harold House. His daughter Anita served as Sheriff of Merseyside.

PRINCE PHILIP, DUKE OF EDINBURGH
On 20th July 1965, he landed by RAF helicopter on the King David School playing field at the start of his visit to Harold House in Dunbabin Road to commemorate its opening.

Unfortunately not the ones with chocolate chips.

Some cookies are necessary in order to make this website function correctly. These are set by default and whilst you can block or delete them by changing your browser settings, some functionality such as being able to log in to the website will not work if you do this. The necessary cookies set on this website are as follows:

Cookies that are not necessary to make the website work, but which enable additional functionality, can also be set. By default these cookies are disabled, but you can choose to enable them below: